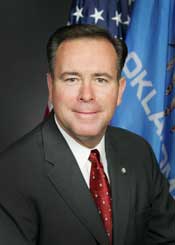 As reported on “LGBTQNation.com”, “Okla. House OKs bill shifting issuance of marriage licenses from state to clergy“, the Oklahoma House passed House Bill 1125. The innocuously named bill – which let’s remember has passed the House – would mandate that all marriage licenses be issued by clergy, effectively eliminating secular marriage completely in the state.

The bill, as we all know from “Schoolhouse Rocks”, still requires passage by the State Senate before becoming a law. With a solid Republican majority behind the effort, however, that seems likely. Looks like the cartoon will need to be updated to reflect the inevitable Supreme Court challenge.

The law would require a ceremony to be performed and certificate to be issued by a “preacher, minister, priest, rabbi, or ecclesiastical dignitary”. Russ claims this “protects” county clerks from having to “recognize” same-sex marriage.

Todd clearly doesn’t realize that non-religious people, according to recent polls, make up as much as a third of Americans. Marriage, secular or otherwise, provides numerous secular benefits ranging from tax breaks to estate disposition to hospital visitation.

Russ and, apparently, a majority of the Oklahoma House of Representatives fail to understand that marriage as a legal arrangement has as long a, if not longer, history than marriage as a religious rite. They also clearly enjoy wasting taxpayer time and money with ridiculous assertions that have absolutely no chance of passing constitutional muster.

For all of this we charge the Oklahoma House of Representatives with Dickory in the First Degree and Accessory Dumbassery. They are sentenced to remain, for the rest of their natural-born lives, in an Oklahoma that will soon leave them behind culturally, socially and politically.

This entry was posted in Sad Politicians and tagged Dickory, Dumbassery, Oklahoma, politics. Bookmark the permalink.