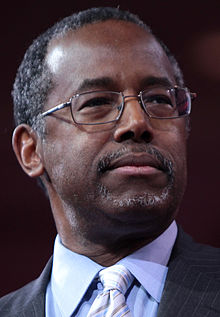 As reported by RawStory.com in “Ben Carson: Pledge of Allegiance and other ‘founding documents’ prove America is a Christian nation” Ben Carson is under the impression that the United States is, tops, 60 years old. The soft-spoken Republican Presidential Candidate and former neurosurgeon told a gathering in Gainesville, GA that he would work to place God at the “center” of American culture:

“The pledge of allegiance to our flag says we are one nation under God. Many courtrooms in the land on the wall it says ‘In God We Trust.’ Every coin in our pocket, every bill in our wallet says ‘In God We Trust. So if it’s in our founding documents, it’s in our pledges, in our courts and it’s on our money, but we’re not supposed to talk about it, what in the world is that?”

In light of this we’d like to remind Ben that “In God we Trust” was only made the national motto in 1956. It was 1957 that the phrase began appearing on paper currency (although it had appeared on some coins as early as 1864). As for the pledge, it was written in 1892 and officially adopted in 1945. However the phrase “under God” wasn’t added until 1954. It’s also worth noting that none of these are clear about exactly which God is to be trusted here.

For those – like Mr. Carson – that need a refresher history course: None of these happened during the actual founding of the country. Rather, all of these changes were direct results of the Red Scare and McCarthyism. Seemingly, Ben Carson prefers decisions made during a period of mass hysteria and distrust by a paranoid, homophobic blowhard rather than the considered opinions of our actual Founding Fathers.

Carson is either demonstrating willful ignorance or flat out lying. In either case he earns a sentence of Dickory in the First Degree.