Sarah Palin is Sad and Stupid, but mostly Stupid 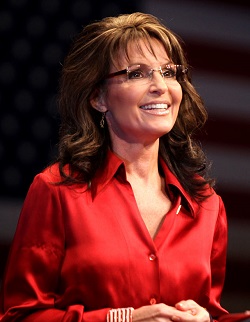 It’s unclear why the media still pays any attention to Sarah Palin, much less her offspring, but as is being reported essentially everywhere, they apparently still have opinions. Stupid, stupid opinions.

The Washington Post sums up the particulars well enough in “Sarah Palin hits media ‘double standard’ on Duggars, calls Lena Dunham a ‘pedophile’” In short, the Palin’s feel that the media treats conservatives worse than they treat liberals.

We’re not going to get into the specific case at hand (or how it’s clearly, obviously massively different from the case that Palin is desperately trying to conflate it with). You can read about that in the WP article or any number of others. Instead, let’s just highlight some of her more insane statements. Palin wrote, for example:

“Such obvious double standards applied to equally relevant stories underestimate the wisdom of the public, discredit the press, and spit on the graves of every American who fought and died for the press’s freedom.”

Palin continues to labor under the delusion that the “mainstream” media enjoys a massive liberal bias. This despite, of course, all that pesky evidence to the contrary. Conservative bastion Fox News continues to best all comers in the cable news ratings.  Conservatives dominate talk radio talk radio due to the power of Clear Channel. In contrast MSNBC, the most liberal of the big three news networks, also gets consistently the lowest ratings and liberal radio syndicate Air America was unable to stay solvent.

There will be no verdict applied in this case, as Palin migrated out of our jurisdiction when she quit her job as an elected official to become a full-time waste of skin. All we can do is hope that the organizations in charge of pointing out civilian stupidity remain vigilant.

This entry was posted in Sad Politicians. Bookmark the permalink.